I was a Protester at a Trump Rally in West Virginia: This is what I learned.

This past Saturday in Wheeling, West Virginia, President Donald Trump made waves in the Friendly City. In the hours leading up to his arrival, hundreds of folks came to show their support for the President and his policies.

Dozens of merchandise sellers lined the streets hocking Trump buttons, shirts and hats. Countless people lined Market and 14th streets awaiting the arrival of arguably the most powerful man in the free world.

Decked out in graphic tees and red hats emblazoned with the indelible phrase of the past 2 years – “Make America Great Again”, supporters professed their love for the President.

I arrived early at 8 a.m for the 7 p.m rally. While standing in line with my ticket, I intended to use the time to listen and learn. I overheard folks discuss topics like the Republican party’s wavering support of Judge Kavanaugh, their deep and personal hatred for Hillary Clinton, and the lackluster appeal of WV Senate hopeful, Attorney General Patrick Morrisey.

These conversations were often followed by a biting reproach of the entire Democratic party as being obstructionist and criminal.

Democrats have their fair share of questionable beliefs, but after speaking with groups present about the phenomena of “Q”, their burgeoning belief that Dr. Christine Blasey Ford works for the CIA, and the old trope that President Obama was not in fact born in America – I felt uneasy about the basis for their concerns.

But, while standing in line, I made friends with some supporters. We spoke about issues that mattered to them like national security, fiscal responsibility, and tax reform. All issues I think liberal folks care about too, just in different ways.

While chatting with people, I knew they would soon see me on the other side of the street, expressing my beliefs as passionately as they did theirs. I couldn’t help but think that – beyond the noise, there were many issues both sides could agree on, but do a terrible job discussing.

We all want a robust economy, we all want to ensure that our children are given more opportunities than we have, and we all know that the national debt is too high. We could work on these issues in bipartisan ways, but our ability to engage in productive dialogue has become increasingly more difficult. 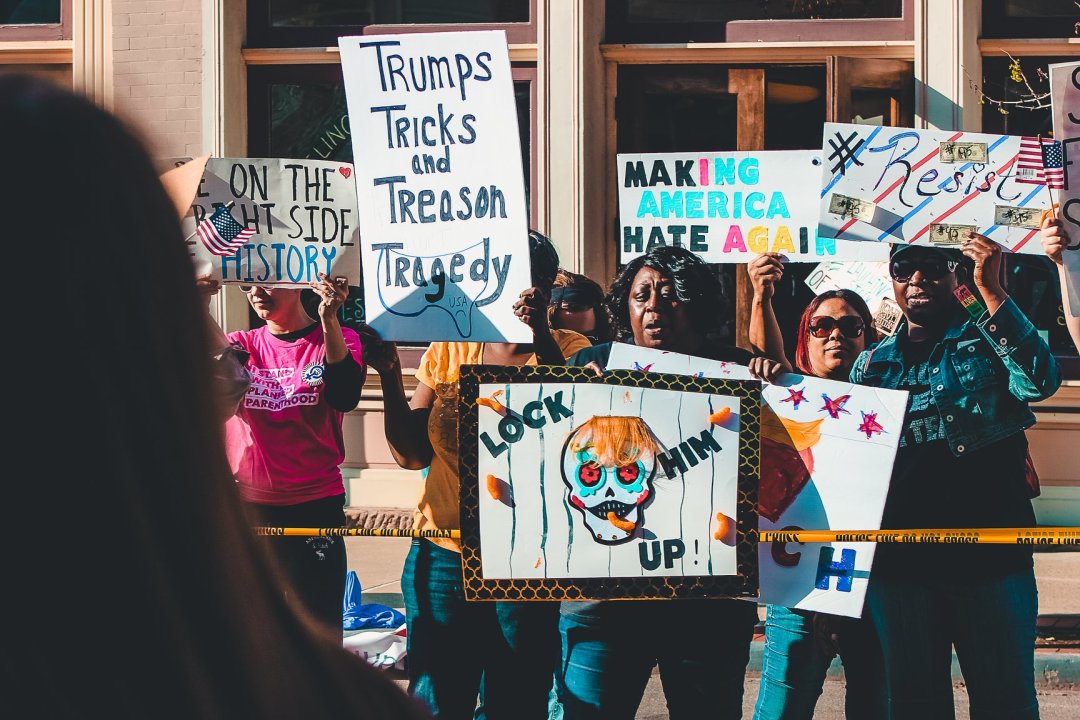 As assemblers began to arrive with signs and banners, I witnessed a clash of values. The two groups found themselves chanting “Trump, Trump, Trump” against the constant drum of “The people united, will never be divided.”

Folks snarled sharp comments against each other

in a chaotic scene.

As a protester I felt compelled to chant with my “side“, but having made personal connections with many supporters, It was harder to engage with such a searing disgust.

This doesn’t mean that I believe protests are ineffective or mean spirited.; I find them extremely effective – one of the most natural democratic vehicle for social change.

Leave the keyboard at home and speak with someone from the other side. NOT with the intention to change their mind or even to win an argument, but to understand them and dissect your disagreements.

I spoke with Pamela from Kentucky who was excited see the President.

“I love him [Trump]. I see the jobs coming back and I think that other people are seeing it too. The things he is doing with our taxes and the military are great.

(Asking if she believes Trumps message is dividing the country)

“I don’t think so, all of us are here and we get along, I think that the people who feel divided would dislike him no matter what. He’s not perfect and that’s actually what I like.”

With many of these platitudes, I came closer to understanding support for Trump and his policies. People in this valley and across the country are desperate for change – they want to believe that one person in power can change the world – or at least make their life better.

But, democracy is a collaborative effort. It does not ride on the word of one man or woman. It requires all of us to use our individual power to manifest change. 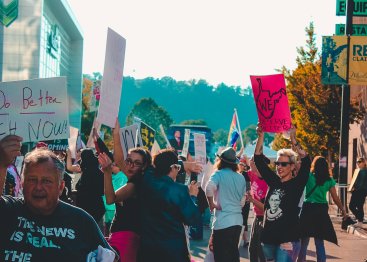 In short – you have to vote.

Yes, we have an electoral college that can (and has) circumvented popular vote in presidential elections. But, there are thousands of elections where EVERY. VOTE. COUNTS. I am quick to remember the 2017 race in Virginia that was decided by a random draw after a tied vote.

Joe R. from Wheeling, a member of the protest, talks about his goal for the assembly.

“Ideally, I would like undecided voters to see why we are so passionate about our opposition to this corrupt administration and help vote them and their allies out, but we also serve as a message to others. We want people to know that this situation isn’t normal and we will remember in November.”

We must recognize that it is more important to be right than to win; arguments, debates and, yes, sometimes even elections.

I am not advocating the purists view demanding only perfect candidates held to unreachable standards – people are inherently flawed. But, I believe we must work diligently to check our egos and intentions before we speak.

I am proud of the many folks I know who fight for the creation and protection of equal rights; for the preservation of our Constitution and its integrity moving forward – these individuals fuel the engines of our democracy.

At the end of the day, we all have a dog in the race. Our individual lived experience will guide what we value and hold as meaningful – who we support and who we oppose.

If I can give the President credit for anything, I can say with certainty that he has emboldened the American electorate in a way that has never been seen before.

Published by The Ketchum Community

View all posts by The Ketchum Community

2 thoughts on “I was a Protester at a Trump Rally in West Virginia: This is what I learned.”

How to: Community Engagement